How I Came To San Francisco

Here's a bit about how I got to be where I am today: an English major who does magic for a living.

It is a typical Sunday morning on the South Shore of Lake Tahoe, and mom & dad are reading the serious parts of the San Francisco Chronicle. My sister and I look at the ads and the comics.

Besides those colorful sections, the other stand-out portion of the paper is the "Pink Section," which lists all things arts and entertainment wise in the City. It is "The City," and I know this because that's how my father refers to it, and when I'm a bit older, that is what Herb Caen calls it, so it is even an even more infallible fact. 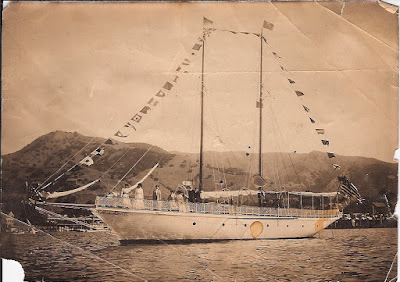 We have been passing through here for some time, my kin. Above is what might be a picture of my Great-Grandfather on a ship. The photograph simply says on the back, "Tiburon Island."

And here he most definitely is with his crew: 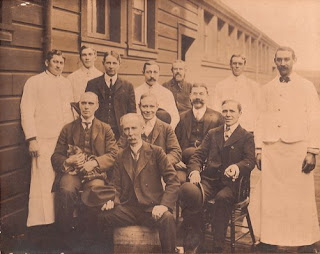 on the back is the list of the men's names, and the phrase in a blue pencil, "My Comsy Crew San Francisco Ferry boats Bars & Restaurants." 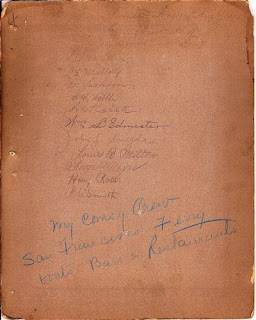 Great-Grandad has been dead for three quarters of a century, but some of the DNA that sat on that chair many years ago courses through the veins of the fingers that type this love note to my adopted city.

My father lived here for about six months between his two marriages in 1960. A few years ago, with my oldest brother and his family, we walked by the house where he had lived on Pacific Avenue, and where my brother had once visited at the age of five. The hills which threatened to flip the car over backwards, and the girl-friend's Rice Krispy treats, and preparation of this odd vegetable called an artichoke, impressed him tremendously. I didn't tell him which house it was, just that we'd be walking by it at some point.

He pointed it out, without prompting, almost a half-century since last seeing it.

On another weekend when I am about seven, the four of us come to the City. I have never seen anything like it. I can't sleep - behind my home are woods, not cars. I hear what sounds like garbage trucks doing their work, all night long. My sister makes a perfect ring of rice around her high-chair at the expensive Chinese restaurant, and my parents consider a suicide pact to appease the Gods that have been offended by a son who finds everything yucky, and a daughter with such a fine decorating sensibility.

On another long weekend, I am about ten, and love things that little boys love, like practical jokes, gimmicks (I still have the Spy Pen), and magic tricks. A man at the magic shop on Pier 39 makes three pieces of rope, of different sizes, turn into three that are clearly the same size, when they have never left sight, and are no where near his body. I am transfixed. I buy the first of what is to become the largest collection of anything I own, save perhaps sheet music.

A friend from work found for me, in the fall of 1999 when people are spending weeks of their lives competing for the right to fork over their rent to landlords, this place from where I now write. I decided to stay - I have always been told that I am a city mouse, and San Francisco will be the fourth great city where I have lived, after Paris, Vienna, and Boston.

The desk was a gift from someone at the Symphony trying to get rid of it; on the wall is a print of a painting from that artist with whom dad lived here - she's gone on to be quite famous, as happens to some people. In her instance, deservedly so.

Today, I shall meet a new magician friend, and work on tricks and rudiments. I will eat, drink, and be merry, though my vegetarian teetotaler ways would no doubt have puzzled Great-Grandfather Charle (no 's'). ("Why in the hell do you live here if you're not going to eat all the great food, and drink all the great drinks, son?" asks the ghost of my imagination.)

Save for this posting on these modern, paired miracles of the computer and the net, my life will not be remarkably different from those of my ancestors. That being said, I will walk the streets that fascinated my hero and honorary San Franciscan Mark Twain, and be within a mile from where the Charter of the United Nations was signed.

We sit here, we San Franciscans born or adopted, at the edge of a Great Nation, on the eve of a no doubt complex and fascinating century, at the edge of a continental shelf that threatens to rub against another at any given moment, wiping us all off of the face of the earth with an indifferent shrug.

And I wouldn't miss it for the world, and there is no place I would rather be.

"I have done more for San Francisco than any other of its old residents. Since I left there it has increased in population fully 300,000. I could have done more--I could have gone earlier--it was suggested." - Mark Twain
Posted by Kevin the Manager at 10:53 PM