Today, May 12th would have been his 92nd birthday. It's OK that he's gone, but a decade somehow needs to be marked. A historian found a recording of my musician father playing with some friends and colleagues, and I've saved it for the last few months for today. Seems like a good idea. 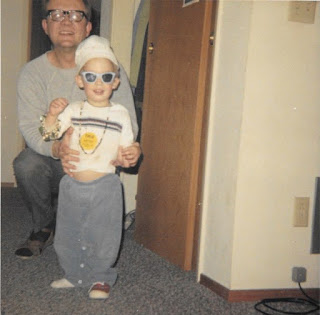 10 Memories During A Little Run in the Woods

In town visiting mom & taking care of business: it's a hallmark of middle age. I have it pretty easy compared to most of the planet's adult children: I live in a modern, industrialized nation, with everything from Medicare and penicillin to licensing standards for medical professionals. As remote as my little, tourist resort hometown of South Lake Tahoe, California is, it has most of Twain's "modern inconveniences."

Bay to Breakers is this coming Sunday, and figured I should do at least one, seven-mile run before it. If I could manage it up here, more than a mile above sea level, my regular runs have indeed been sufficient preparation. You can find my pictures and whining about how much I loathe running via my #ReluctantAthlete tagline on social media, or here: Critically Kevin on Twitter

First, walked by Jamie and Molly's old house (they purportedly had parents too, and we saw them, but the house was about Jamie & Molly). Across from the home in the willow tree thicket, two naughty boys hid sometimes in the winter, from which they'd throw snowballs at none-too-amused cars. We'd have gotten by Scot-free in the 4' deep snow, if Jamie had chosen something other than a bright orange jumpsuit for his child-terrorist outfit that day.

Then Mark's house a few blocks down; his father changed sects of their religion, and then their first and last names, then moved away to San Jose, which to a 10 year old might as well have been to the other side of Mercury.

Then where I was incarcerated for seven years: Tahoe Valley Elementary School. Yesterday's ceiling is now two inches from the finger tips, and not a soul who braved instructing my generation hasn't retired or hasn't moved on or off our little stage. Saints, every one of them. Especially Mrs. Ward, Mrs. Cluff and Mrs. Johnson (sent back chocolate from Vienna to one of them, wrapped to stay cool - but got the name wrong. Pretty sure I got my sixth grade teacher's name wrong, again in writing this.)*

* Diana straightened me out: yes, it was Ms. Nelson.

A brief hospital visit, and as always impressed by the other genus of saints I knew not as a child: those who work daily with the ill and the infirm. If you know a nurse, you know a person who on their worst day is a roughly 20% better human than am I. In an odd coincidence, whenever I go there, I am on the ward where my mother gave birth to me: it is a peculiar thing to consider.

Getting ready for the run, and walking past where there was a movie theater once: the beautiful then and beautiful now (and now Dr. Jennifer, thank you) snuck me into a horrible movie about two teenager vampires. I'd look up the movie, but there's a reason I can't remember the name, and I feel I should not oblige you to waste any of your time on it, dear reader.

I set the Nike app on my now ancient iPhone 5s for 7 miles, and trotted off. Past the airport, and remember dad taking us there in a taxi to catch a PSA flight (like most American airlines, PSA was long ago absorbed into another), and him carefully explaining to me how never to tip more than a dollar. Mind you, this was about 1977, and perhaps he just didn't feel like explaining tipping percentages to an eleven year old.

On the right is where Diana and her fine family lived; her dad was particularly interested in mass transit, a challenge which is still of interest to me. Running on the edge of the high road, trying to be visible, until I turn onto Sawmill Road (no idea if there was a mill there ever: that is worth looking up, so if one of you diligent/OCD folks could get on that, it would be great), and pass the development where my retired elementary music teacher Jim Hildinger & his accomplished wife Gloria live. You might have heard her voice on international news coverage during the Angora Fire some years ago. Jim is an accomplished photographer with a national reputation, and everything he's shot is worth looking at. Go peek at some from a European musical tour here: Jim Pics.

Miles to go before I stopped, but that's enough. The magician I manage, Ash K., is back in San Francisco, probably crocheting or reading something I'd find dull. Or fixing a prop for one of his kids shows. But I'm here at the lake, the place my late father first saw as a small boy riding from Los Angeles with his parents in an old Ford in the 1930s, and that my mother saw first a half-century ago. His 92nd birthday would have been this coming Thursday: the choir she founded forty-five years ago, the Tahoe Community Choir, gave a lovely Mother's Day concert. It was something else to see her there, applauded nearly a half-century later for her impulse to bring another kind of beauty to an area chock-full of it.

Like them, I come and I go, but part of me is fixed here in the woods permanently, albeit invisibly, undetectably, and I'll concede not at all importantly. Maybe you'll see a bit of me, the next time you pass by one of the muskrat dens.