At the Mill with the Jazz Man 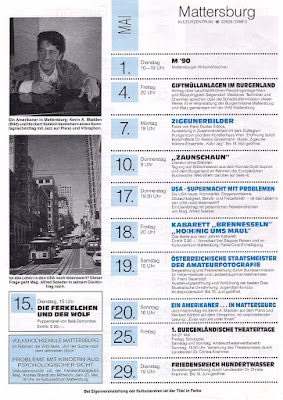 This is a program from when it was effortless to weigh 170 lbs. That is to say, it was a while ago.

Towards the end of my stay in Europe in January, I was able to make plans to visit my friend and fellow musician Hepi Kohlich (Hepi is a nickname for Heribert, though I’ve never known another Hepi!). He kindly invited me out to his “new” digs on the Western outskirts of Vienna, Neulingbach, and I spent the day with him and his eight-month pregnant partner, Julia.

We spent the day wandering around, and later Hepi gave me a lift back into Vienna, as he had a gig at a place where I used to hang out in 1988, called The Tunnel. He was doing the job that we pianists are most frequently paid to do: accompany singers. In this case, amateur singers. He was patient and professional, as always. I met my friend Joe, a journalist who has lived in Vienna for 20 years, and who had taught at the same school where I taught a few years before I got there. After gabbing till quite late, I returned downstairs to listen and ponder the fact that I had been first come there before some of the waiting staff were born. Egads.

The day with Julia & Hepi was a blast. They mentioned that they lived next to an old mill, and when we went for a long walk, that the there was a museum nearby. I didn’t understand that the other part of the house they lived in now was the museum! They opened a door (I expected perhaps a closet on the other side of the door), and instead was the inside of an actual mill that had been used up into the 1930s. The owners of the building were a couple with a strong interest in history, and the place was filled with implements and books.

It was two floors of nicely displayed materials, including explanations of how the equipment worked, and artifacts from all aspects of Austrian life.

The program is a page of the Mattersburg Culture Center’s advertisement, referencing the concert that I gave back in 1990. Hepi was also an instructor of mine at that time, and he kindly agreed to play the vibraphone in several duets. He was a blast to spend time with then, and now. Note the picture & reference to San Francisco? Oh, the strange, strange fates we weave. I never had a big plan to move to Mattersburg or San Francisco, and that's about all the two towns have in common!
Posted by Kevin the Manager at 8:46 PM