The Magician/Piano Player guy on Vacation in Austria 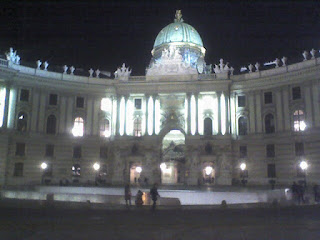 I am back amongst old friends. I lived & worked in Austria's capital, Vienna, in the spring and summer of 1988, then after finishing my BA at UC Davis, returned on an exchange program to teach in a small town south of Vienna the following year.

I am tickled pink to be here. I've seen several friends, visited some old haunts, and spoken with other buddies. I've known some of these people for almost 19 years! Egads.

The flight to London was marked by its beginning (no available seat, but others gave theirs up), and the end (two hours wandering around Heathrow, the sleep-deprived victim of poor signage and low-grade English chaos). I wrote a bitchy entry about it, but it's not what the trip is about for me. Did I mention I'm tickled pink to be here? 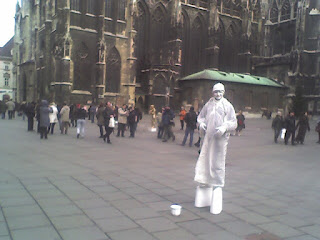 (This guy is performing in front of Stephansdom, the great cathedral in the heart of Vienna. He's more obnoxious than Ash, that's for sure!)

In Vienna, friends came to pick me up at the airport. Away we went into the night, and after dropping off my stuff at their home in a district near Schönbrunn, the summer home of the Hapsburg Empire, we wandered for a few blocks to a restaurant, and had Italian food.

As is the case everytime I speak French or German, as soon as I engage in speaking for longer than a few minutes, I begin to forget English words I am looking for, and am left in the precarious position of not being able to either clarify a point in German (not knowing the word), nor being able to remember the concept in English to ask for a translation. It's always been that way for me (I'm sure there is a neat, neurological explanation for what is probably a common phenomenon), but no kind of word is exempt. I couldn't remember the synonym for quirky until the next day, when "eccentric" popped into mind, and I have found my poor brain busily circling itself, looking for such difficult words in my native tongue as gloves, or ground floor.

Friends wait politely, until my brain coughs up an appropriate work-around. Today, my friend Petra just giggled when I could remember the German word, but not tell her the English word.

I'll tell some more entertainer stories later, but look forward to working with you this year, doing either magic or music for your guests. As always, I can do everything from break the ice at the rehearsal dinner with some table magic, to providing a classy band at the wedding. Let me know what I can do for you!

I'll be back at the end of the month, but would love to book some work from abroad. Please drop me an email at the email below, rather than gmail.

Posted by Kevin the Manager at 6:45 AM