At the Cafe With Austria's Most Famous Magician 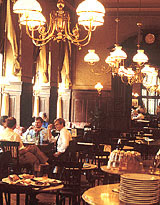 One of the many pleasures of the trip was meeting with a fellow whose stage name is the same one his colleagues call him – “Magic Christian.” We met at the Café Sperl, which has been his regular haunt for all of his life, and which was one of mine when I first lived in Vienna in 1988. It’s the first Café I went to on this trip, too.

When I tell folks about meeting him, the first question is how did I get to do this? It’s been my experience that when you present yourself to the world seriously, people take you seriously. People tend to treat respectful inquiries with respectful responses, and he went a step beyond with his openness and generosity in giving his time.

We didn’t have any shortage of things to talk about, and I sat at the table that afternoon and later that evening at another place, across the way from one of the living masters of my art. There are things I can do with my fingers with coins and cards that impress many folks; there are things that Magic Christian could do at age 17 that I’ll probably never fully master.

FISM, the Olympics of Magic, is held every three years, and he won the World Championship in the manipulation division not once, nor twice, but three times. He is also a fine scholar, and a fluent English speaker. We chatted mostly in English; in German, his voice is serious and dramatic, and in English, he sounds remarkably like Henry Kissinger.

But he’s nicer than Hank. When I complained of problems I’d been having with my rented cell phone, he told me I should have called him – that he’d have been happy to loan me one.

Later that evening, someone recognized him at the place where he’d gathered with some other magicians after a formal meeting of Magic Club of Vienna, and I watched him not only handle the drunk, boisterous, over-enthusiastic and grabby group of folks, but mesmerize them as well.

It was a pure pleasure to watch him work, and spend time with him.

For more about Magic Christian, his web page may be found here: http://www.magicchristian.com/index_en.html

The Café Sperl: http://www.cafesperl.at
Posted by Kevin the Manager at 4:12 PM